If wisdom is valued above discomfort, the dual meaning of the word "present" can carry more weight in this season than in any other.
By Susan Creamer Joy - Tuesday 20 Dec 2011 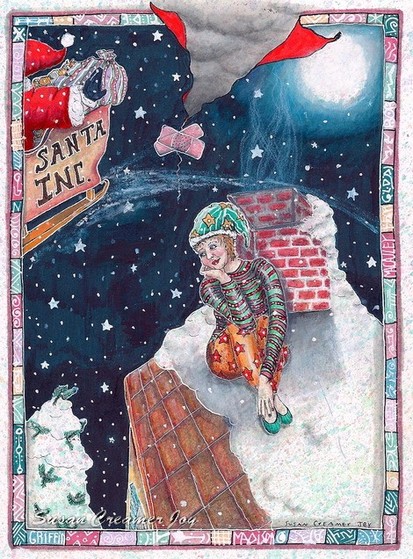 And so it is Christmas, again.

From the drawing table in my studio where I now sit, I can look outside through the facing window and see our wrought iron furniture laced with icy tendrils of frozen white, and in my momentary need to gather some magic about me, I imagine them having been spun into crystallized symmetry by some Nordic god. This thought makes me smile.

Depending upon where you live the winds may have also grown decidedly colder forcing front porches and backyard patios to shed their hospitable design. I notice our own snow-laden clay pots, stacked against disorder in a dormant corner of the yard, still hold the grayed, brittle remnants of summer’s blooms; and seeing them I am drawn to consider the benefits of hibernation and the power of seasonal glee as it arises through music and song.

There are only a handful of Christmas songs I look forward to hearing, songs whose notes resonate with an earlier version of my life and can entice my heart to linger a while amidst the memories of simpler days.

‘Have Yourself A Merry Little Christmas’ is perhaps my favorite, and I willingly revel in the sentimental chords that place the wounds of the present into festive, wrapped boxes and delivers them to a place where I am able to open them as the gifts that they inherently are.

I know that there is no such thing as useless suffering if wisdom is valued above discomfort and the dual meaning of the word “present” is not lost on me in this season or in any other. There is a priceless gift in remaining alive to the moment even if that moment is fraught with despair.

Those moments are more plentiful for many in this joyous season of family, sleigh bells and thanksgiving. It is a difficult incline towards joy while caught in the lyrical grip of Silent Night or The Christmas Song when your own nights may feel anything but silent and far from helping to make the season bright, a turkey and some mistletoe only remind you of who is missing from the table and why.

But that is the perfect time to open one of those festooned boxes of unresolved emotion and try it on for size. Turning ill-fitting grief into a bright garment of resolution and illumination is a gift worth keeping and one with the option of re-gifting to someone else. It is the gift that keeps on giving.

And so it is Christmas, again.

A few days ago I stumbled upon an old home video, one that was taken by my husband on a Christmas morning seventeen years ago and featured the very young editions of my three children. At first I watched it with bemused interest, laughing at the stridency of my youngest who at age three was already managing our household with the conviction of a five-star general and at the lithe and dreamy character of my middle daughter and her relentless determination to float above the chaos of the morning bundled in little more than optimism and her new sweater.

What parent would not be moved by the delight of an enchanting moment held in the celluloid grasp of a better time?

Then the camera panned to my son. At twelve years old he struggled mightily to subdue his obvious elation at the gift he received of a pair of roller blades, no doubt believing that because he stood on the precipice of his teens, any marked outburst of joy would betray the serious estate of his young adulthood.

Yet however much he tried to neuter his outward response, he could not erase the truth of it in his eyes, and as the camera lens closed in upon them, I saw what I have not seen in them for the better part of the past ten years: I saw happiness and I saw peace.

As the camera recorded him eagerly fitting his feet into those cumbersome wheeled boots, my mind quickly flashed to the young man today where he resides in a state penitentiary and to the addiction, diffidence and collapse of integrity and hope that brought him there one ill-fated choice at a time.

Frozen and almost unable to breathe I stood before the television screen and watched the grace and strength of his movements as he exercised his new gift in the driveway in the company of his sister. Struggling to stifle the surge of sadness that threatened to ruin the moment, I observed the two of them laughing with the unbridled giddiness known only to the young as they circled the lumbering body of our ever-patient Newfoundland, Frodo, and I wondered with an almost desperate need, how it happened that the innocence of that time became so deeply undermined.

It is difficult to imagine such darkness could evolve from what seemed such brilliantly privileged beginnings. Privileged not in wealth or in trappings but in love and belief – in family and intentions. Yet it can and it did, and as long as he has remained in this state of broken, these sentimental songs of Christmas have not been easy to hear.

Yet some part of my soul still craves them, and I have to assume that it is the same part that holds out hope for a happy ending; the part that is willing to unwrap these pretty boxes of subdued grief and model the contents until they fit like velvet robes of acceptance and peace.