What makes a writer? What matters more, dedication or publication? Are writers judged by their prose or their popularity? You tell me.
By Susan Creamer Joy - Sunday 02 Oct 2011 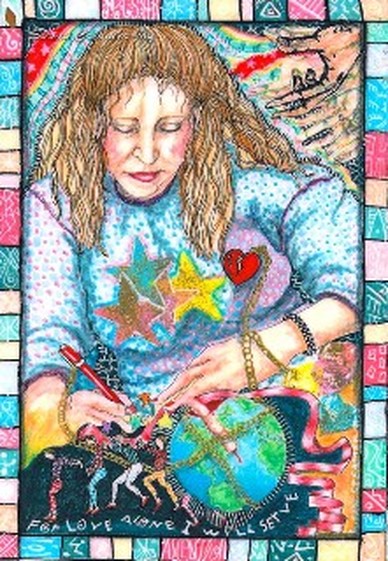 In the seventh grade when Mrs. Spangler, my bespectacled English teacher, announced to my parents that I had a “gift with words” and predicted I would go on to do “great things in the world of literature” when I was grown, I heaved a sigh of relief. My quest for greatness and purpose had been resolved – right up until the basal moss of genetic insecurity crept over my gratitude and I remembered that I was nothing special.

What if Mrs. Spangler was wrong?

What if I exposed my “gift” to public scrutiny and discovered I truly had no gift?

If Mrs. Spangler was wrong, I had no back up remarkableness.

If Mrs. Spangler was wrong, that meant I was ordinary and without great purpose.

By the end of high school I had managed to table a portion of my apprehension, enough to take a high dive into that lake of misgivings and see if my dream would float.

Whether I was motivated by intellectual and creative hubris or by a need to effectuate a bohemian standard is not clear, but in my only year of college I enrolled with a double major in both art and English. While the professor in my creative writing class greeted all of my efforts with much enthusiasm, this was not so in the other more technical and rigorous English classes where I failed miserably.

What is the point in diagraming a sentence? I could see the relevancy in breaking down the visual landscape if we were preparing for a bank heist, but these are words. If you lay them out in a sentence and they don’t sound right, you simply reorder them until they do. Isn’t that writing?

Evidently, I was alone in my approach to the craft and also soon realized, inflated in my belief that I had skills as a visual artist. On the single, dreaded evaluation day at the end of the final semester of my single year of college, the head of the Art department sternly suggested I stick with my English major. This was not good news having just come from being told the same in reverse by the head of the English department. I took this as a sign that I was simply not meant to go to college.

But that was okay. I was a writer.

I moved to New York City and worked as an administrative assistant to the Vice President/editor-in-chief of New American Library hardcover division. I typed letters, filed pending book proposals, ferried endless vats of coffee to my boss and to the boardroom and learned that almost all authors of decent standing crave thin-sliced pastrami on rye with Russian dressing.

At some point during my brief tenure there and in an inexplicable fit of confidence, I sent some of my poetry to The Yale Literary Magazine. The upshot from that came as a visit from the editor, and while he did not consider the poems I had submitted to be quite ready for publication, he felt differently about those he read during our visit and offered to publish one of them. He also felt I should be writing full-time and sent a pleading letter to my father in Connecticut attempting to solicit his financial support on my behalf.

That letter alone was worth the price of submission.

It was a full page of gilded accolades, the sort that take your breath away and leave a self-deprecating, underachiever like myself convinced that surely this must be a mistake. It was a letter only another writer, a poet, could write closing with the flourished psalm, “I am doing this for Susan, no, for what she will one day write. And let us hope that when she writes she mentions both of us — for those poets mention live forever.”

As an English major himself, my father was very proud. He made many copies of the letter and sent them out to all of our relatives. He then he sent me back to the city on the five o'clock train. After all, I had work in the morning.

In time it became easier to live with an illusion of the potential greatness I wanted to believe I contained than with the possibility that my father’s decision was the best one. I began to mythologize this interior muse, this special something that enabled me to feel set apart and to get through the ensuing years of creative compromises and through the eventual, hapless mediocrity endemic to child rearing, toilet scrubbing and aging with at least a modicum of interior worth and respectability.

But I was still a writer.

And I did write. I wrote hundreds of letters, Christmas cards and grocery lists. As a young mother, I wrote glowing accounts of baby’s first steps in a scrapbook and reordered the table of contents and topic sentences in countless elementary-school book reports and science projects with the dedication and finesse of a Bronte sister.

After all, everyone knows that if you don’t exercise your gifts, eventually they will atrophy and go away.

And while those around me in the mundane hills of suburbia submerged themselves in the culture of ordinary with mindless but dedicated abandon, I calmly tolerated the tedium and carried out all of my perfunctory duties with the requisite posture of obligatory martyrdom. In spite of the relentless press of mediocrity against my soul, I thrived because I would say to myself, “I am not like the others.”

Forty-four years ago Mrs. Spangler told my parents something that made the fifty-six years I have courted inclusion almost tolerable. In these years I have raised three children, sheltered far too many animals and learned to speak Husband fluently. Creatively, I have designed greeting cards, artist rubber stamps as well as jewelry; had numerous freelance illustration jobs from corporations to co-ops, and sold my paintings, prayer dolls and shrines in galleries and specialized shops in four states and two countries.

Yet for me it remains that the brightest light shines in the darkest corner of my attic where there are several large boxes filled with copies of correspondences and lengthy emails to friends spanning four decades, alongside several others stuffed with poetry, prose, sketches and the ritual notations of an ordinary life recorded on hand-drawn calendars.

I keep solid, leather journals in which I chronicle the most exceptional of my delusions, irrational of my fears, intangible of my joys and unbearable of my sufferings with a near pathological obsession. These thoughts and words, held captive in my soul until ordered onto paper, are all I really have with enough potential to distinguish my being from that of the sodden lump I might otherwise be. I keep them safe and well fed.

My world is full of papers filled with words: handwritten, typed and computerized.

I am everyone because I am no one.

And until now, I have never shared

Am I a writer? You tell me.
Tweet
I am a writer, right?